In 2011 and 2012, my focus was mainly on my writing, which means that my small plant nursery business and flower gardens didn't receive the attention that I'd given to these things, in the past.  Countless hours spent working on the computer (instead of out in the yard) do seem to have been worth the effort, though.  I'm happy to say that this year, 2012, has been a banner year for me!

A real milestone for me was having my book, 'Paudash Poems,' published by Brian Wrixon Books, of Burlington, Ontario, in July of this year!  This volume contains almost every one of my poems that has appeared in The Bancroft Times newspaper, starting with the first one, 'Springtime In Paudash,' which was published back in May, 2006. 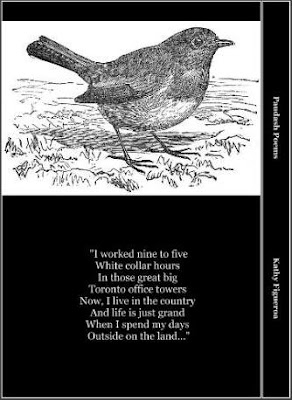 As well, I'm very happy that I was able to contribute to a dozen different Canadian poetry anthologies that were published in 2012!  Here's a list of the books that include my work:


Posted by Kathy Figueroa Poetry at Monday, December 10, 2012 No comments:

I love working in my flower gardens and often think that there's no place I'd rather be, especially during bloom season, so I call my gardens, 'Flowertopia.'

Blogging is something new to me and I'm just learning how to do it so, until this blog site is a bit more developed, here are some links to other places where you can currently find my poetry in cyberspace:

Frequently, it's while I'm working in the flower gardens that I become inspired to write a poem.  Often, the first lines just occur to me, out of nowhere, while I'm busy weeding away...

Kathy Figueroa Poetry
Bancroft, Hastings County, Ontario, Canada
Ever since Kathy Figueroa submitted her first poem to The Bancroft Times newspaper, in May of 2006, her poetry has frequently appeared in Bancroft area publications. No stranger to folks in the region, readers of The Bancroft Times and Bancroft This Week were already familiar with her freelance articles which she began to produce in 2004. A broad and diverse range of print media across Ontario have also published her work including: the Anishinabek News (along with the annual Pow-Wow Guide), the Belleville Intelligencer, The Country Connection Magazine, the Haliburton Echo (Weekender section), The Link magazine, and the Mohawk Nation Drummer. As of 2012, her poems can be found in a dozen different Canadian poetry anthologies as well as on several international poetry websites. 'Paudash Poems,' her first book, was published by Brian Wrixon Books in the summer of 2012 and contains most of her poetry that has appeared in the Bancroft newspapers from May, 2006 to midJuly, 2012. Kathy resides in a rugged rural area approximately eight miles south of the town of Bancroft, Ontario, Canada. ♫